Congratulations to Stephen Bird who is to be exhibited in the Adelaide Perry Prize for Drawing 2019.

Bird is one of the 44 selected finalists for the $25,000 Acquisitive Award.

The Perry Prize Exhibition of Finalists 2019 opens in March at the Adelaide Perry Gallery. Congratulations to Zoe Young who has won the $30,000 Portia Geach Memorial Award for 2018.

“The Portia Geach is vital for female artists across the country and has provided a much-needed platform to display the work of young, emerging artists alongside that of established painters whose work I greatly admire. The award gives me the support to progress my artistic practice and I look forward to creating my next body of work.” – Zoe Young

Works by all 50 finalists are on view at the S.H. Ervin Gallery until 2 December.

See the winning work below. 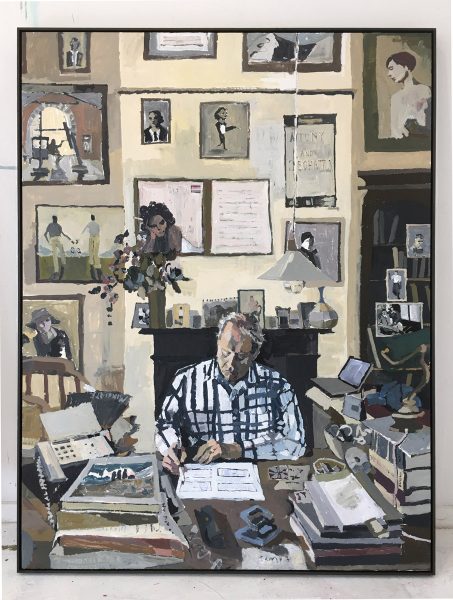 Olsen Irwin would like to congratulate Laura Jones on being selected as a finalist in the 2016 Portia Geach Memorial Award.

The Portia Geach Memorial Award was established by the will of the late Florence Kate Geach in memory of her sister, Portia Geach. The non-acquisitive award of $30, 000 is awarded by the Trustee for the entry which is of the highest artistic merit, ‘…for the best portrait painted from life of some man or woman distinguished in Art, Letters, or the Sciences by any female artist resident in Australia during the twelve months preceding the close date for entries.’

Olsen Irwin would like to extend a big congratulations to Alan Jones for being a finalist and to Jo Bertini for receiving runner up in the 2016 Paddington Art Prize. Bertini was also awarded the UNSW Art & Design Award, allowing her to work on a future project with master print maker Michael Kempson of internationally renowned Cicada Press. The award was presented by Wayne Tunnicliffe from the Art Gallery NSW last night at the Paddington Art Prize. The prize runs from 20 October till 30 October at 111-113 Queen Street, Woollahra, 2025.

Olsen Irwin would like congratulate Laura Jones on being selected as a finalist in the 2016 Eutick Memorial Still Life Award (EMSLA) at Coffs Harbour Regional Gallery.

“It was the brainchild of Dr Mal Eutick who wanted to honour the memory of his parents while contributing to the artistic and cultural life of Coffs Harbour.

“This year we had over 220 entries from all over Australia and the 68 finalists include notable artists such as Leo Coyte, Laura Jones, Monika Behrens, Samuel Condon, Graham Marchant, Robyn Sweaney, Madeline Preston and Ted Hillyer.”

This year’s judges are Nat Thomas, the artist and arts writer/cultural commentator, and Michael Fitzgerald, writer and editor of Art Monthly Australasia. They will be announcing the winner at the opening of the EMSLA Festival on Friday, 11 November, at Coffs Harbour Regional Gallery.

“The quality and diversity of the entries we received made it a very difficult job for the judges to shortlist the finalists. I don’t envy them trying to pick the ultimate winner,” said Ms Moncrieff.

As well as the announcement of the winner, the Opening Night will feature the naming of the People’s Choice Award winner and a special performance by popular soprano Michelle Der Kinderen.

The EMSLA exhibition will run until Saturday, 7 January, 2017 at Coffs Harbour Regional Gallery.

Olsen Irwin would like to congratulate Marisa Purcell on having three works in the final of the Grace Crossington Smith award.

‘The award is sponsored by Abbotsleigh and commemorates one of its alumni, Grace Cossington Smith, who is known as a pioneer of modernist painting in Australia. Artists were invited to submit original two dimensional artworks reflecting the theme of Making Connections. The winning entry will form part of the permanent collection of Abbotsleigh’s Grace Cossington Smith Gallery.’ –GCS Gallery

The winner of the Kilgour Art Prize for 2014 is Alan Jones!

Alan will receive $50,000 for his highly original Robert Forrester #2, a painting of the artist’s convict ancestor. Alan has depicted his ancestor against the small plot of land granted to him in 1794 which is just along the Hawkesbury River.

Alan expressed his delight in winning the prize, taking great joy in the confirmation it gives to his practise.

“Something like this… It’s like someone saying to you ‘Mate you are doing alright, you are going in the right direction, just keep going’… It’s hard to get that sort of feedback from other people, it’s a lovely surprise.” – Alan Jones in Conversation with the Newcastle Herald.

The annual Kilgour Art Prize for figurative and portrait painting awards first place to the most outstanding work of art as decided upon by a selection panel.

Sophie cape has been announced as the winner of the Portia Geach Memorial Award for her spectacular portrait of actor Dan Wyllie. Consisting of oil and acrylic paints, charcoal, bitumen ink and soil, Romper Stomper measures 209 x 203cm and expressively captures the personality of the actor as well as the characters that he has performed over the years.

“I just did a whole lot of sketches then I took the canvas out to the bush and attacked it in an abstract way…It’s more about getting the emotion and feelings and energy into the work first. Then back in the studio I started to pull the face out.” – Sophie Cape in conversation with the Sydney Morning Herald

The fact that this painting was decided upon over 300 entries to the prize and then again out of 49 finalists speaks volumes of its undeniable quality and likeness. For taking first place Sophie will receive $30,000.

An annual prize, the Portia Geach Memorial Award exhibits contemporary portraiture by Australian women artists and is recognised as a significant celebration of the talents and creativity of Australian female painters. The prize was founded by Florence Kate Geach in memory of her sister Portia Geach with the first award being given in 1965.

A big congratulations to Sophie Cape, Jo Bertini and Tamara Dean, who have all been picked as finalists in the Portia Geach Memorial Award for 2014, to be exhibited at the National Trust S.H Ervine Gallery.

The annual award exhibits contemporary portraiture by Australian women artists and is recognised as a significant celebration of the talents and creativity of Australian female painters.

The prize was founded by Florence Kate Geach in memory of her sister Portia Geach with the first award being given in 1965. Portia was a strong campaigner of women’s rights and intent on painting at the highest standard, despite the lack of opportunities given to women artists in Australia during the first half of the 20th Century.