âTalent to burnâ: At last a solo show for artist Valerie Strong Olsen

It would be wrong to say Valerie Marshall Strong Olsen waited a long time for her retrospective. Any suggestion of waiting disappeared with the artist’s death 10 years ago. What makes this show at the National Art School’s Rayner Hoff Project Space so special is that it is also Olsen’s first-ever solo exhibition. Today, when artists are showing work and publishing catalogues before they graduate from art school, it’s an almost unimaginable career profile.

Could it actually be called a career? Olsen’s story stands in dramatic contrast with that of her ex-husband, John Olsen, whose work may be seen in the NAS’s main gallery, in the survey, Goya’s Dog (until November 27). John, still full of vigour at the age of 93, is this country’s best-known living artist. Brash and egocentric, he has had countless exhibitions and been included in every major Australian collection. Valerie (1933-2011) was all but invisible, but just as dedicated.

The difference has been that John has lived his life in public and lapped up the applause, while Valerie seems to have approached art as an essentially private passion. She was notoriously unwilling to part with works and almost wilfully retiring. Almost everything in this exhibition, put together by her children, Louise and Tim Olsen, is still in family hands. 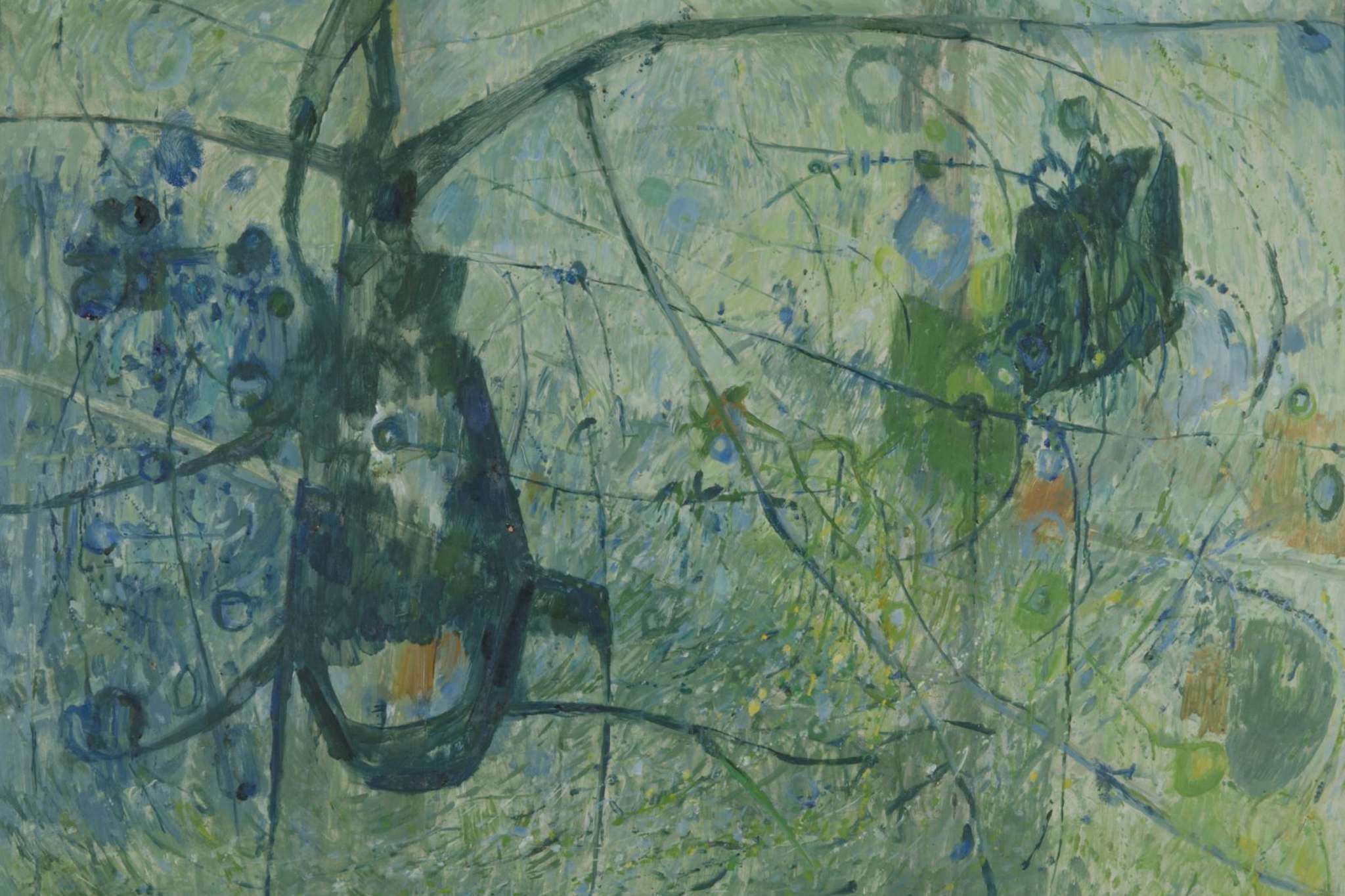 Deftly catching the wave of abstraction that was sweeping the planet: Olsen’s Afternoon Yarramalong (1963).

In this #Metoo moment it would be easy to see Valerie as one of those stereotypically oppressed wives who sacrificed her own ambitions to those of husband, home and family. There’s an element of truth in this because John cast an almighty shadow and displayed the full set of masculine traits we now love to hate, but it’s not the whole story. If Valerie had wanted to have a career as an exhibiting artist she could have had one. Her work was good enough and if John were an obstacle – practical or psychological – that problem was removed when he left in the early 1980s. 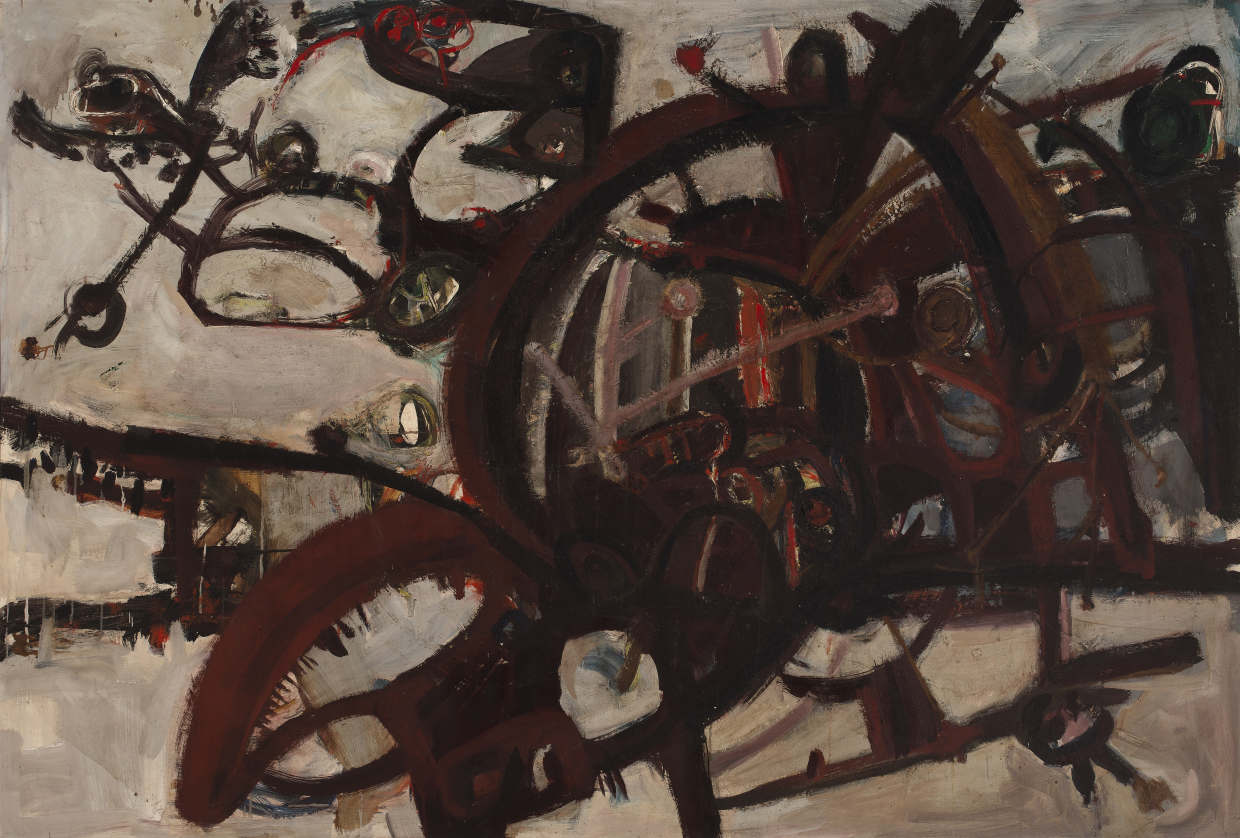 Like her husband, she found excitement in Spanish painting: Encuentro Español, (c.1966).

The decision not to show has its pros and cons for any artist. No deadline pressure or commercial imperatives allows for a good deal of freedom, but the trade-off means missing the inestimable stimulus of seeing your work on a gallery wall, where faults and weaknesses become immediately apparent.
The title “a rare sensibility” comes from a remark by British artist, Alan Davie, who visited the Olsens in Australia and admired one of Valerie’s pictures. There’s an undoubted sensibility here but also a frustrating lack of development. Valerie had talent to burn but she acted as a lifelong student, constantly sampling and experimenting. I lost count of the number of other artists whose influence may be seen in these pictures – from Miró to the CoBrA school; from John Passmore and Godfrey Miller to the Surrealists, the French Tachistes and the American Abstract Expressionists. She cited Arshile Gorky as a particular inspiration.

Everything Olsen attempted was skilfully executed and embraced on a deep level. She didn’t settle for superficial resemblances but entered fully into the spirit of each venture. It’s the originality that goes missing – not because this is something innate to each person, but because she never seemed to persevere with a style of painting long enough to reach this plateau. 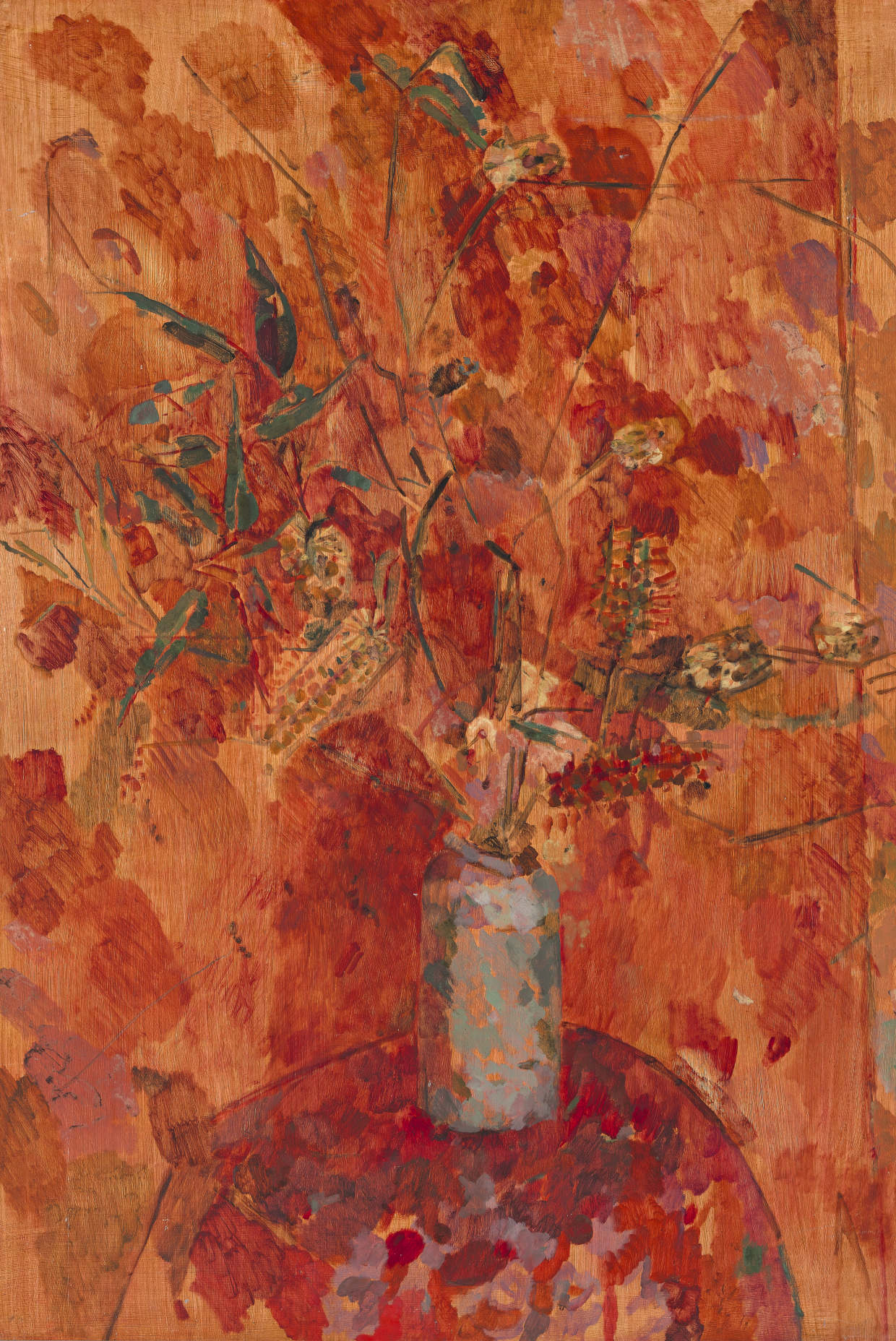 John Olsen was no less derivative, no less obvious in his influences, but ambition and determination drove him to break through to another level. His greatest works transcend comparisons with his peers.

With Valerie, the avant-garde aspirations of paintings such as Undergrowth and Afternoon Yarramalong (both 1963), are rarely equalled in the later works. In these pictures, still ostensibly landscapes, she deftly catches the wave of abstraction that was sweeping the planet. In Encuentro Español (c.1966), Olsen shows that she could match it with her husband in reflecting the excitement they found in Spanish painting.

Later works such as Red Gums, Angophora Valley (1980) and Summer Pond (c.1985) show Olsen being prepared to continue working on a large scale, but she has grown much less assertive. These paintings are impressionistic studies that respond sensitively to the landscape, putting clusters of small brushstrokes against thinly painted fields of colour. There’s an ‘overall’ feel to these interiorised paintings, which capture a mood rather than any specific scene. She’s more interested in tone than in composition.

There are small pictures from every period – mainly landscapes and still lifes – that show Olsen’s quality as a painter. It’s a little sad she never had the urge to push herself into the limelight. Fortune in the visual arts tends to favour the aggressive, self-confident types, but for Olsen this would have gone completely against the grain. Then again, perhaps it’s unfair to expect all artists to be shouting, “Look at me!” We might be more appreciative of those who can temper their creative obsessions with demonstrably human qualities.