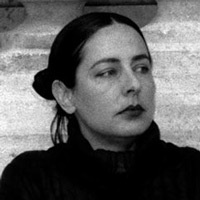 Marie Hagerty is a Sydney born artist who shifted to Canberra about 30 years ago and has been working primarily as a painter.

Hagerty has a very effective and curiously unusual hybrid approach, both in her techniques of painting, employing traditional oils and modern acrylic, as well as in her conceptual framework. She seamlessly combines within a non figurative composition seemingly figurative elements realised within a high degree of verisimilitude to surfaces and textures. The inclusion of a woman's leg, face or torso, usher the paintings into an ambiguous realm, where there is a perception that some sort of feminist narrative is implied by not explicitly stated. Above all, her paintings display a high degree of visual intelligence in their subtle play of push and pull optics across the sensuous rolling surface.

In recent years her paintings have been included in curated and invitational exhibitions at the National Gallery of Victoria, the Ian Potter Museum of Art in Melbourne and the Gallery of Modern Art in Brisbane. Her work is currently included in an exhibition at the Canberra Museum and Gallery, which runs until 22 February 2015. Hagerty is represented by Olsen Irwin Gallery in Sydney and Karen Woodbury Gallery in Melbourne.

“....what really makes these works so effective is the optical trickery they employ. By the subtle shading of the squares and a clever manipulation of the black lines separating them, Hagerty creates a beguiling impression of three dimensionality. As you stand there, each plane seems to push out from the one 'behind' it, so that each painting has its own aura of quiet movement and mystery.”