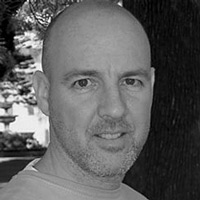 David Band was born in Glasgow in 1959 and studied at the Glasgow School of Art and the Royal College of Art, London. In 1983 he established The Cloth Studios, in London. Having exhibited extensively, he moved to Melbourne in 1986. David lectured at RMIT, Melbourne from 1989 to 1994, founding MRB in 1995 and joining Gasworks Studios in Melbourne in 1996. In earlier years, his paintings were inspired by music and later by jazz legends such as John Coltrane and Miles Davis.

Throughout his career Band built on his reputation as a painter and innovative abstractionist, and continued to exhibit overseas and throughout Australia until his passing in 2011. His works are held in the National Gallery of Australia, the National Gallery of Victoria, the Victoria and Albert Museum, London, the Chicago Art Institute, USA, Artbank and various corporate and private collections both here and overseas.

“I have known Band’s art since his first exhibition in Australia in 1987 and I have always been moved by it. Band has a profound talent to create beauty, to make beautiful art. Band has a serious relationship with colour, shape, line and texture and the expression of these elements is as essential to him as love or water. His ability to utilise various techniques and to manipulate materials lends his work uniqueness and exceptional quality. Band’s techniques are sound and they are apt for their purpose. They are embedded in his art.”