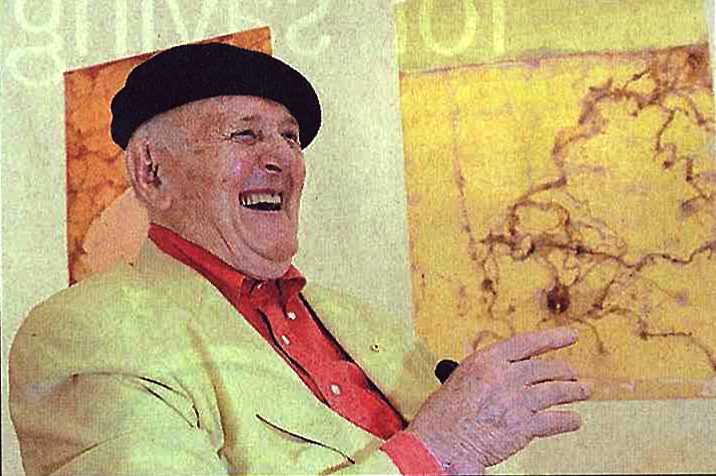 
In casting around for a theme for this year’s Australia Day special, we hoped to choose one that would give the artists scope to explore and celebrate what it means to be Australian. The brief was that the work should be a personal response to our country’s diversity, landscape and culture. Each artist has brought a distinct vision of how they understand and picture our national character, reflecting the wide rang of reactions to the idea of Australia Day. The artist, 82, tells what he knows about… 
The National Gallery of Australia has bought John Olsen’s Butcher’s Cart Deia de Mallorca. Painted by the 82-year-old artist in the past year, it depicts a meat cart he used to walk past while living in Spain in the 1950’s. 
John Olsen, the elder statesmen of Australian art, is preparing to go toe-to-toe with the federal government over proposed changes to superannuation policy, which he says threaten Australia’s status as a creative nation, the livelihood of emerging artists and the viability of the art market. 
Having a famous surname has been a great motivator for a woman called dove, writes Keilie Hush... Making a splash, John Olsen and Paloma Picasso meet for the first time at the Tim Olsen gallery in Woollahra. 
John Olsen uses paint in his culinary masterpieces, writes Tracey Clement. Judging by the bulging band of celebrity chefs cooking up a storm on the telly, Australia has become a nation of foodies. But long before the popularity of MasterChef, Jamie Oliver and the luscious Nigella, iconic Australian painter John Olsen was getting busy in the kitchen. 
For the passionate and creative John Olsen, food is art and, in
his latest exhibition and book, art is food, writes Helen Pitt. En route to the Spanish island of Majorca, artist John Olsen had an epiphany in Barcelona's La Boqueria market. The year was 1957 but, growing up in 1930s Australia, he thought green beans were meant to be khaki-coloured and peas were grey and mushy. Born in Newcastle in 1928, where his father ran a clothing shop in Hunter Street, he says his mother as a cook was typical of her time: everything was over-boiled. 
The man who is arguably Australia's greatest living artist has combined his love of food and art - and family - in an exhibition with a twist, writes Katrina Strickland. John Olsen and Stephen Ormandy were discussing openings. The 82-yearald Olsen has had dozens, including one for his latest show, Culinaria: The Cuisine of the Sun, which opened at Tim Olsen's Sydney gallery last night. Olsen's son-in-law, Ormandy, had his second only last month 
A lifelong love of cooking is the inspiration behind John Olsen's latest exhibition It's not often that you get the chance to have Australia's greatest living painter advise you on the finer points of cooking - in particular. how to make a paella - but that's exactly what happened when I spoke with Dr John Olsen A0 about hisnew exhibition, Culinaria. The show, which opened at son Tim Olsen's Woollahra gallery on March 2, is a series of works celebrating John's well-known passion for food that began when he lived and worked in Majorca in the 1950s. 
Children can struggle to find their identities growing up in the shadow of a celebrated parent. 
CWK salutes a grand old master from a generation of painters who taught us how to read the country. 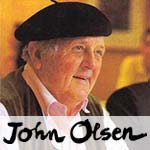 This wonderful documentary produced by Catherine Hunter and presented by Max Cullen investigates John's enduring passion for the Australian landscape. John revisits Lake Eyre after many years with artist and friend Tim Storrier and discusses his deep love for the desert. Cullen examines other environments that have shaped John's artmaking, including the years spent in Spain in the 1960s; Clarendon, SA and Sydney Harbour, Kings Cross and Hill End, NSW. Fascinating insights are provided by Edmund Capon and Barry Pearce, Art Gallery of NSW.

Archival footage of John teaching drawing at the Julian Ashton Art School and painting in the landscape. John Olsen - A Salute to Sydney

John Olsen's exhibition 'Salute to Sydney: Olsen at Eighty' opened to tremendous acclaim in November 2007 and signalled the official opening of the new Tim Olsen Gallery on Jersey Rd. Tim hosted a red carpet gala event that was attended by many Olsen devotees together with notable artists, actors, writers and television personalities.

John Olsen's exhibition 'Salute to Sydney: Olsen at Eighty' opened to tremendous acclaim in November 2007 and signalled the official opening of the new Tim Olsen Gallery on Jersey Rd. Tim hosted a red carpet gala event that was attended by many Olsen devotees together with notable artists, actors, writers and television personalities.

Long time friend and director of the Art Gallery of NSW Edmund Capon opened the exhibition that marks an important shift in Olsen's paintings from the vast dry interior to Sydney's harbour and beaches.  In the excerpt of the evenings events John Olsen also reflects on his childhood spent on Sydney's shores that provides the central motivation for this beautiful collection of paintings.

Filmed and edited by Noah Hutchison of artcine.com.au 
The fireworks arrive early as John Olsen celebrates his birthday with a swashbuckling assault on Sydney. 
Ahead of his 80th birthday, John Olsen is revisiting his boyhood seaside haunts on canvas, writes Louise Schwartzkoff. 
Artist John Olsen turns his attention from the outback to the beach in his latest works.

On the eve of his 80th birthday, John Olsen sparkles with excitement as he
reveals he has been realising some new paintings. “I’m in love again,” he says, referring to two vast canvases he’s been working on in his studio over the last three months. They evoke, he says, “memories of being brought up at Bondi and around the harbour. There is such a kind of myth
in Australia of being born under the sun.” 
The record-setting John Olsen is still painting with the excitement of a child in awe of Sydney Harbour, writes Lyndall Crisp.

An American collector who'd never heard of John Olsen and had seen only an image of his work in an email attachment has paid a record price for a painting sold through an Australian commercial gallery. The prominent Washington art lover, acting on advise from an agent, paid $750,000 for 'Spring Tide', a 200 x 400cm oil on board by Olsen.