Ten years after their mother’s death, Tim and Louise reveal the striking landscapes and portraits painted by the limelight-shy second wife of John Olsen.

Above: ‘She had no ego’: Australian artist Valerie Marshall Strong Olsen, who died in 2011, pictured here in the mid-1970s. Her children, Tim and Louise Olsen, are now staging her first solo exhibition. Photograph: Robert Raymond

In her dying days – on her good days – artist Valerie Strong could look out of the window of her room in Darlinghurst’s Sacred Heart hospice. From there, she could see the sandstone walls of the National Art School.

“She was so happy to be able to do that,” says her daughter, Louise Olsen, herself a painter, sculptor and designer. “Sometimes, she would do little drawings of the place from her bed.”

The National Art School (then the East Sydney technical college), housed in the historic precinct of the old Darlinghurst gaol, was where, in 1961, Valerie met her husband-to-be, the painter John Olsen, now considered one of Australia’s greatest living artists.

“My father was a teacher there, my mother one of his students,” says Louise’s brother, the Sydney gallerist Tim Olsen. “You’d be locked up for that these days. And they were both married to other people. But they were soulmates from the start. Dad fell for her femininity, her decency and her dignity.” 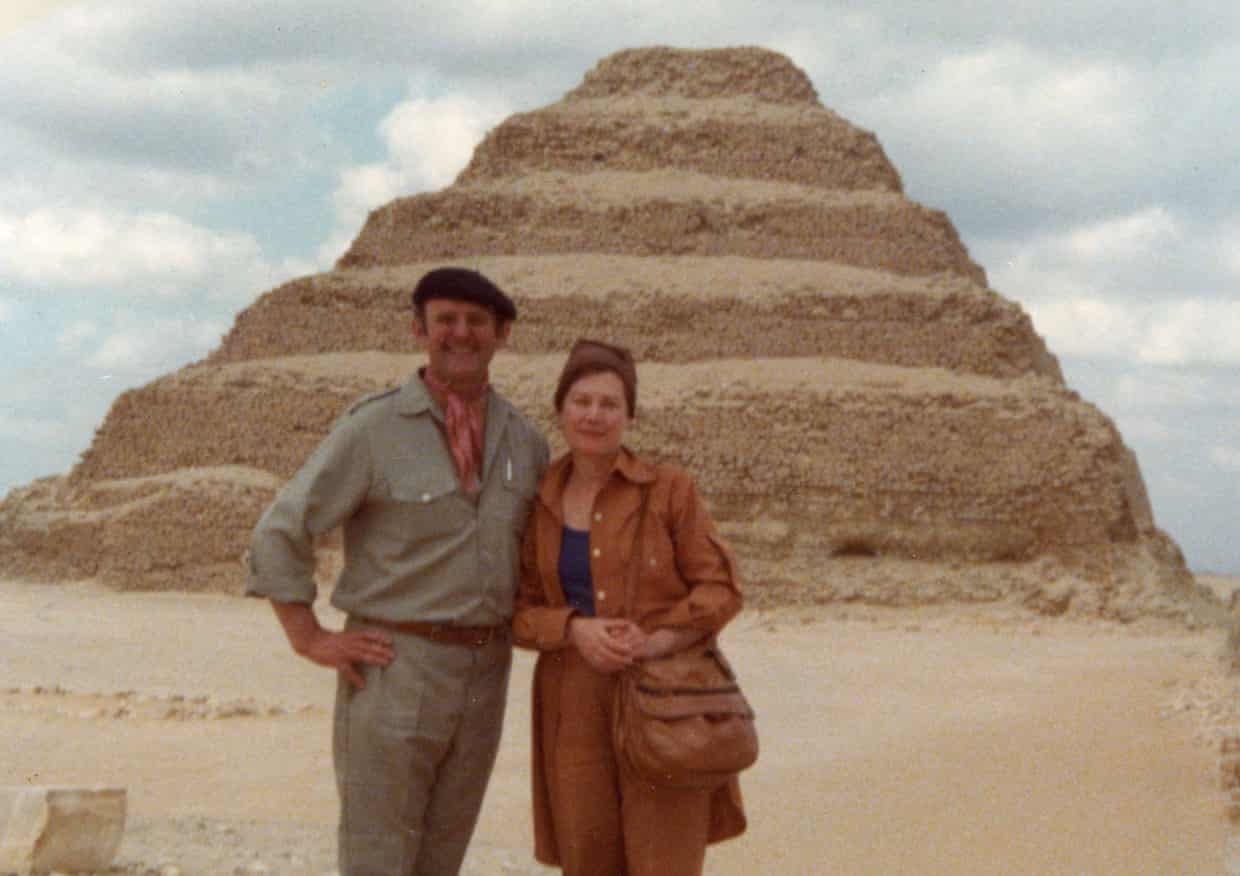 Photo: ‘Soulmates from the start’: John Olsen and Valerie Marshall Strong Olsen in Egypt in 1978.

Louise and Tim are guiding me through the first exhibition dedicated to their mother’s work. It features 67 prints, drawings and watercolour paintings, many from Louise and Tim’s own collections. Most are on show for the first time.

“It’s actually quite emotional,” Louise says, looking around the room. “I miss her so much.”

“She left us an incredible body of work that she made very quietly,” Louise explains. “She wasn’t at all concerned with being recognised for her art. It was as if she had no ego.” Valerie Strong was born in Sydney and spent her early years in New Guinea with her family. They returned to Australia at the outbreak of the second world war. After leaving school, she studied as a millinery designer, eventually saving enough money to put herself through East Sydney Tech.

The first paintings you encounter in the exhibition – Afternoon Yarramalong, a bush landscape painted in 1963, for example – are drawn from those early years. “It’s about her feelings about the bush,” Tim says. “It would have been started plein air but finished in the studio, so it’s about memory. Mum always believed memory was the most powerful thing.” 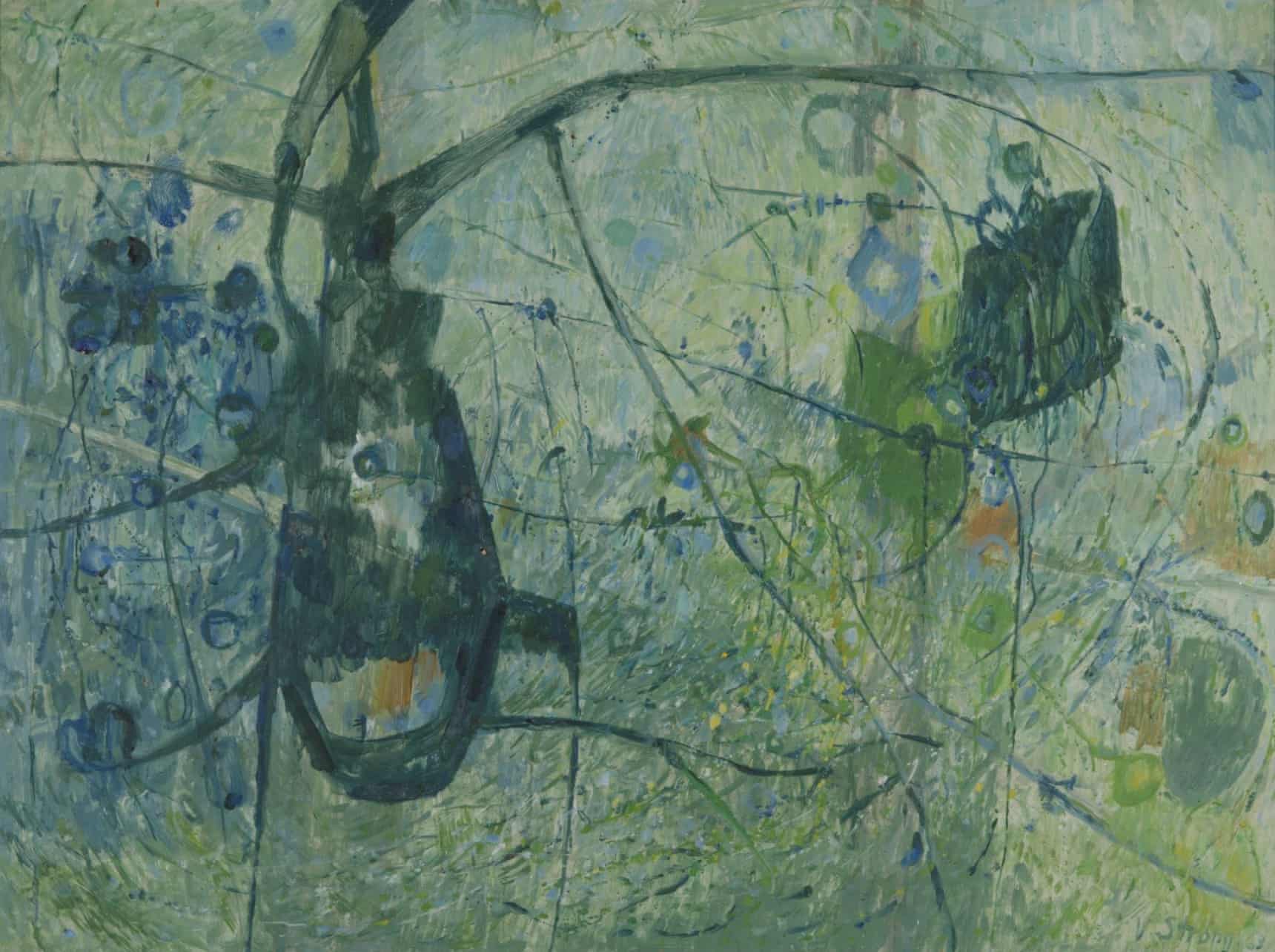 Strong was under the tutelage of John Passmore at this point, he adds. “He was almost like a Zen Buddhist in his teaching, very much against the vulgarity of the art world. He instilled that in my mother. He wanted to transmit the idea of selflessness, that you should not let anything get in the way of the truth.

“Passmore was really the antithesis to my father, who likes to conquer the landscape in his work, who has bravado and assertiveness. My mother was the opposite, just happy to be at one with nature.” Though self-effacing, Strong was also a restless talent, always experimenting with new forms. You see one such shift in style in a trio of small paintings: Yellow Room (1970); Dam at Dunmoochin (1970) and The Red Leaf (1971). 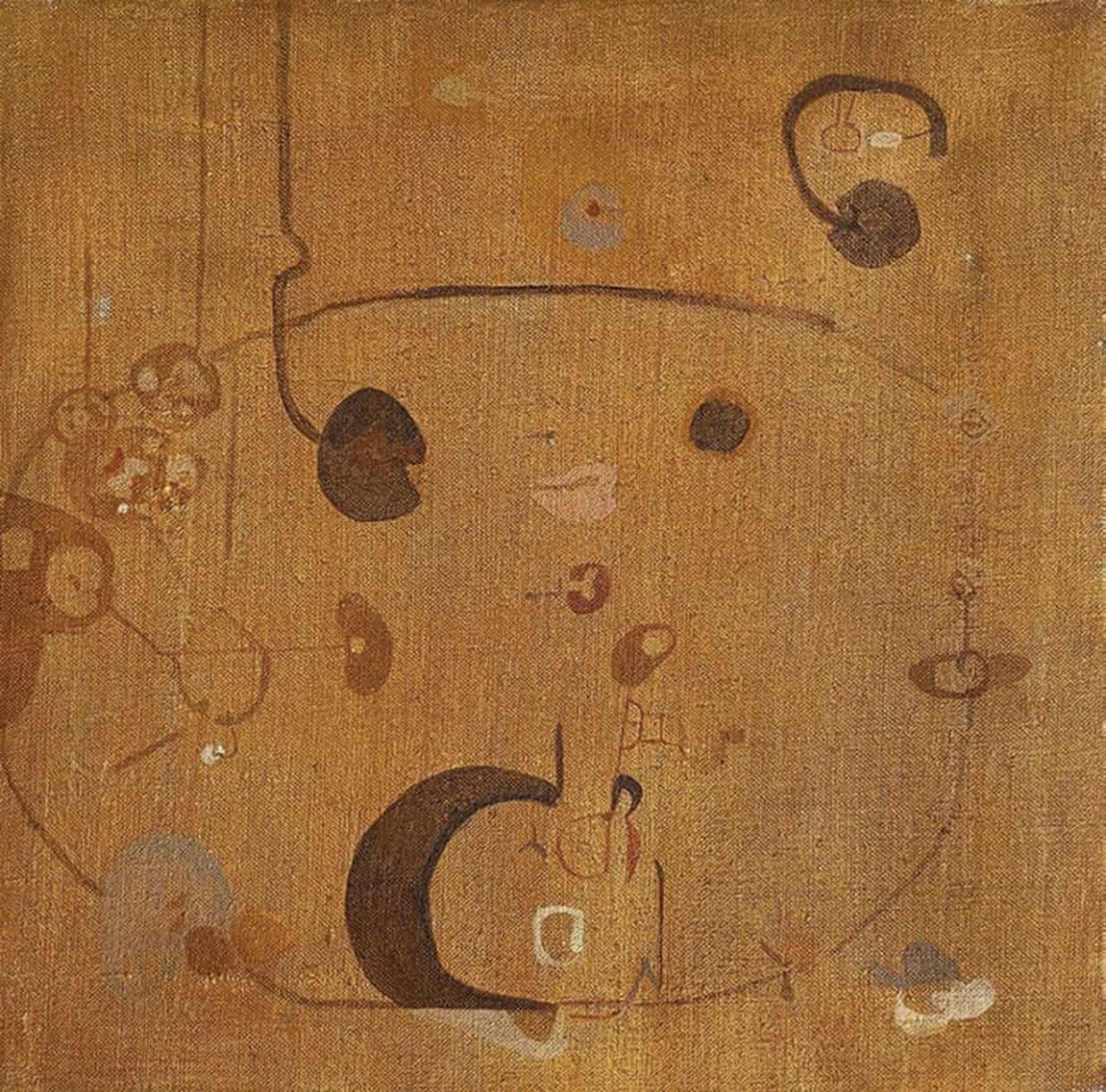 During that period the Olsen family lived at Dunmoochin, an artists’ colony north-east of Melbourne founded by a group of artists including Clifton Pugh. It is still operating today.

“We lived in a mud brick house with no electricity or hot water overlooking a dam,” Louise says. “Dam at Dunmoochin captures it. Mum spent a long time getting that muddy palette absolutely right.”

It was “a pretty outrageous time”, says Tim. “Louise was six, I was eight. It was all very 70s – pretty volatile, there was a lot of nudity, a lot of philandering.”

Strong didn’t participate. “She’d be in the background, getting the tea together,” Louise says. “She was happy to float along with it but she was very private.” 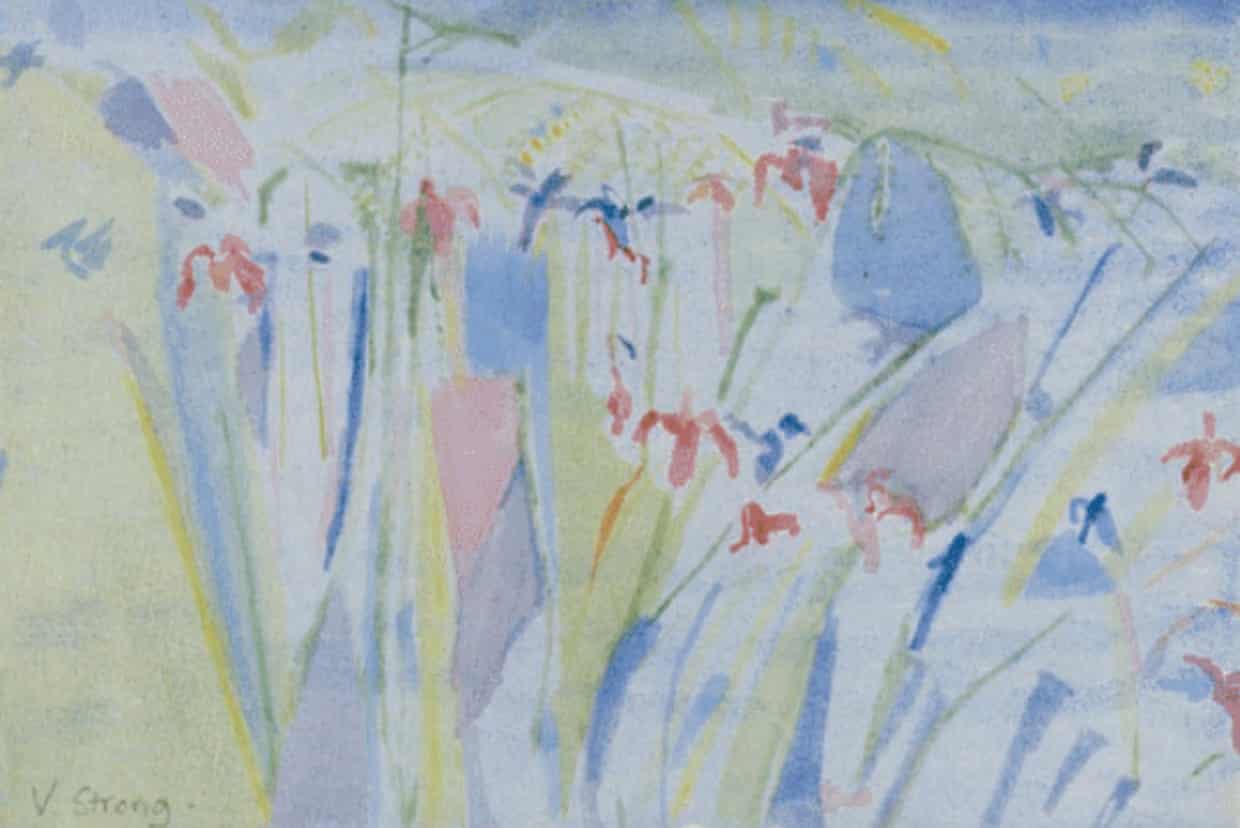 From the mid-1970s, Strong’s eye was often drawn to flowering plants. “She would go out into the bush with a magnifying glass,” says Louise. “She was looking very closely at nature. Some of these paintings might look like abstracts but they’re not. Look at nature and you will see these forms.” Many of Strong’s paintings are extremely delicate. “She was a slow painter,” says Tim. “She would work on things for years, putting them away then bringing them back out again. She used to say ‘Knowing when to stop can be as difficult as knowing when to start.’”

Tim points out the irises Strong painted. “They were grown from bulbs she smuggled in from Kyoto,” he says. “Too late to be arrested now.”

Louise takes me closer in. “Look at her native orchids. She would spend six months developing this tone. She used a special watercolour paper and a very fine brush and she would do layer after layer, building up colour. She loved the process, the fine detail.”

Strong was an avid portraitist and life drawer, too, though figurative works form a relatively small part of this collection. Among the portraits on show is Margaret Olley and Pomegranates, painted in 1985.

“I’ll never forget Margaret saying, ‘your mother … she’s a good painter but she takes a while!’” says Tim, chuckling. “Margaret wasn’t known for her patience, she liked to get on with life.” 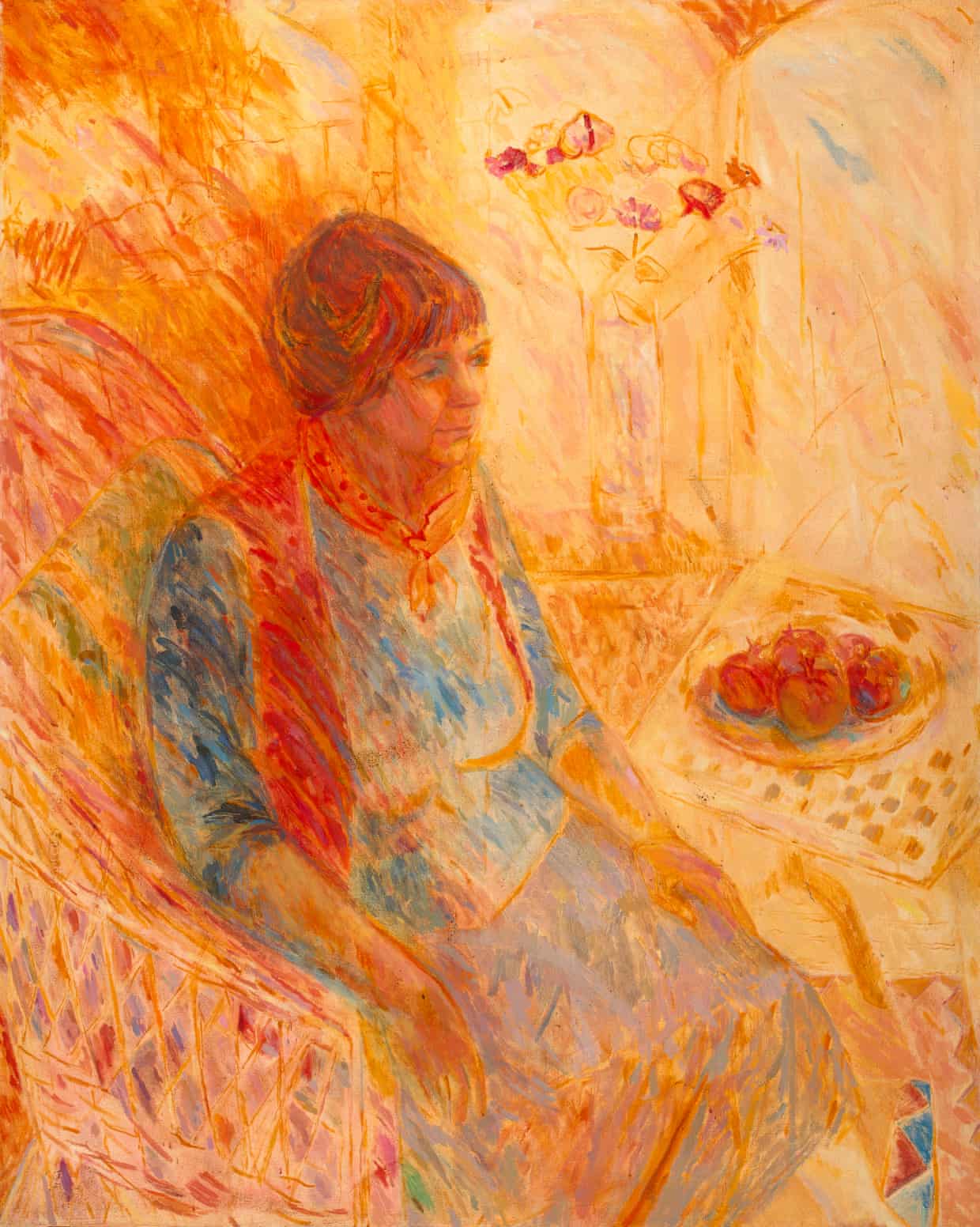 The portrait took over two years to complete, says Louise. “Mum liked to sit and dream about it. They were great friends. Mum loved Margaret’s frankness. There was no mincing of words.”

The contrast between the vivid extravagance of John Olsen’s work and the focused modesty of Strong’s is striking. It’s hard to imagine them coexisting.

“It really was yin and yang parenting,” Tim says. “Dad was the rock star but Mum really gave us the grounding and the self-esteem.”

Did she ever feel overshadowed? Tim thinks not.

“She preferred it. She didn’t want to be in the limelight at all. For her, there was a time to speak out and a time to exercise restraint. I’m still learning that lesson every day.” 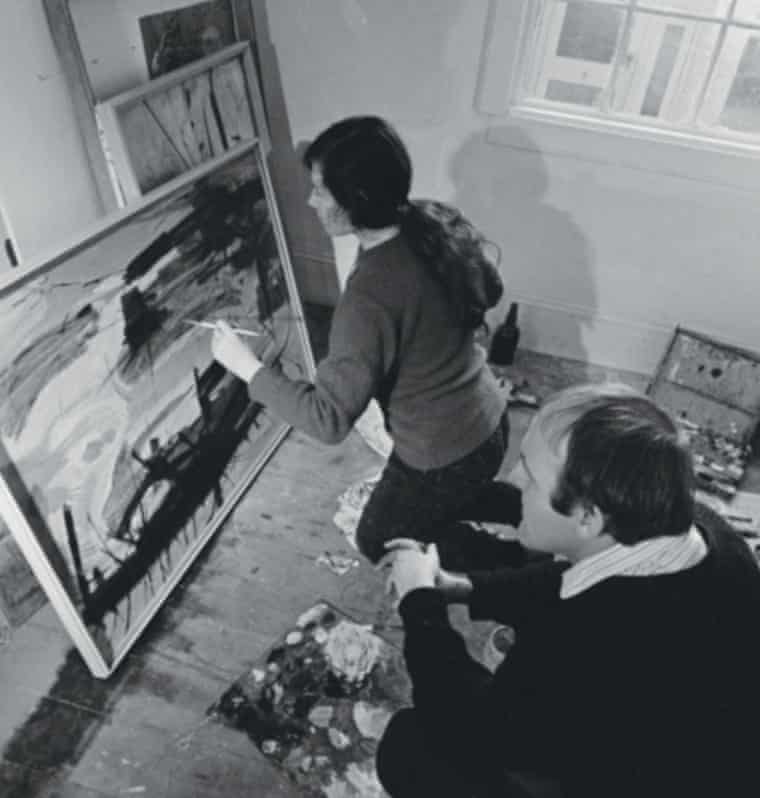 Louise recalls a “very hands-on mum”. “She thought it was important that Dad kept painting in the studio and she looked after us. She painted early in the mornings and when we were at kindergarten. She found the time. Mum wasn’t looking for fame. She was happy that Dad found his and that she could create her own art for no other reason other than that she loved doing it.”