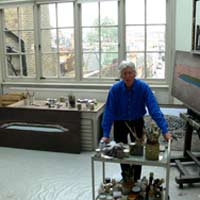 William Delafield Cook, the quiet hero of Australian art, was one of those rare artists whose works, due to his considerable following, have gone straight into public and private collections as soon as the last brush stroke was dry. His monumental canvases, which pay tribute to both the beauty and ruggedness of Australia's landscape, are owned by big-name private collectors, from Kerry Packer to Rupert Murdoch, from Lord McAlpine to the Westfield owner, Frank Lowy.

He took the London art scene by storm in the 1970s with several sell-out shows at Cork Street's Redfern Gallery, but Delafield Cook's name was put firmly on the British art map when Elton John bought almost an entire show. Together with fellow Australian artists such as Sidney Nolan, Brett Whitely and Arthur Boyd, he has commanded some of the highest prices for contemporary art in Australia and in this country ever since. Delafield Cook's career, spanning more than 60 years, was recognised in the Queen's New Year's honours list of 2013 when he was made a Member of the Order of Australia.