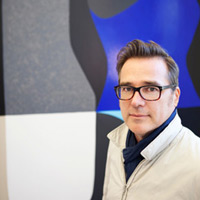 Born in Melbourne, Stephen Ormandy graduated from The City Art Institute (now known as Art & Design at the University of New South Wales) in Sydney in 1985. During his time at the college he met Louise Olsen and Liane Rossler and in their final year of study they established the design company Dinosaur Designs, which has grown to be one of Australia's leading design brands specialising in resin and metallic jewellery and homewares.

Alongside his role as Creative Director of Dinosaur Designs, Stephen Ormandy has maintained and continued his independent artistic practice. Ormandy is inspired by the natural world and informed by a strong design aesthetic based on colour and form. There is a discernible dialogue between his large-scale oil paintings and sculptural work, with line, shape and surface each informing the other.

Ormandy was a finalist in the Sulman Prize at the Art Gallery of New South Wales in 2015. In 2016 Stephen Ormandy and Louise Olsen published The Art of Dinosaur Design that coincided with a travelling exhibition which has shows at Bega Regional Gallery and Hazelhurst Art Gallery.

His work is held in public collections across Australia including Artbank, The Sir William Dobell Art Foundation, The Powerhouse Museum, The National Gallery of Victoria and The Art Gallery of Western Australia.