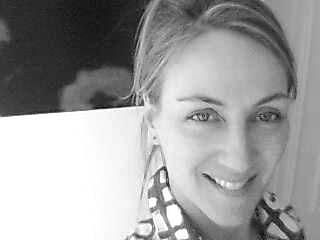 Brooke worked as a graphic designer in Sydney for almost ten years before she moved to London permanently in 1988. Attending art school for the first time in 1990 to complete a Foundation in Art, she later studied part time to complete a BA in Fine Art in 2001.

Curious about antipathy towards aesthetically pleasing painting in art institutions at the time, she chose to research this in her undergraduate thesis on the âabandonment of beauty' in contemporary art practice. She resumed the research in 2012 taking a Masters of Research, to consider whether neuroscience may be used to re-frame Friedrich Schiller's Letters on the Aesthetic Education of Man in order to review the problematic idea of aesthetics in contemporary fine art practice and theory.

Schiller proposed that beauty created a balancing of the two opposing human impulses of sensuality and reason. He suggested that when these are experienced equally, an oscillation - or âplay' - is created between the two: and when we experience this we 'have a complete intuition of [our] humanity' - of the reality of our senses on the one hand, and the capacity to reason on the other.

The research on Schiller's aesthetic theory has influenced a development in her painting practice.

âI deliberately set up formal oppositions: abstract versus figurative; man-made versus natural; hard-edged versus soft-focused. Rather than making the painted surface either abstract (only 2-dimensional; all surface) or figurative (a 'window' into a three dimensional space), my aim is to make the surface appear to be both at the same time; to provoke a 'play' between the two oppositions, so that abstraction and illusion are held in an oscillation, where neither is dominant.

Collecting printed images and my own photographs as references I make paintings with oil paint in a traditional manner. I start with a tonal under painting, building up the colour with transparent glazes. Each layer needs to dry before the next is applied. Careful use of large flat brushes, like the warp and weft of a loom, creates a fabric-like, transparent surface. The reflective surface of the glazes acts as a veil. Glimpses of images appear as though they are floating behind, or even like projections onto, the surface. Getting that balance, that play between the âscreen' of the painted surface and the illusion of depth, is the idea driving my painting practice. The paintings attempt to make the surface an active threshold, not quite one thing or another - an equivocal, unfixed field.'