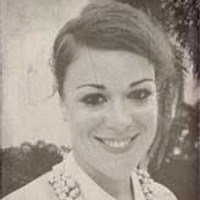 For this collection of inked, collage drawings on slightly foxed papers, Miss White threw away the recipe. Her loosely threaded cast of characters are based on observation, experimentation and wordplay. Subjects include wallflowers, trophy wives, domestic gods, party crowds; all of them performers, merely players.

Edwina White's bower bird approach to the use of found materials, and automatic drawing, often injected with a wry dose of humour seem deeply connected to her Australian roots. Edwina graduated from Visual Communications, teaching surrealist image making, exhibiting, performing and illustrating for designers and magazines until her first solo show, 52 pickup. It was the sell-out show of original works based on playing cards that took her to New York.

Now working as an artist, animator and illustrator worldwide from her post in Brooklyn, New York, the Tim Olsen Gallery is thrilled to be representing White and hosting her exhibition in 2013. Her works are included in the collections of The Hayward Gallery (UK), Angela Missoni (IT) and Teresa Heines Kerry (US), filmed by Jay-Z in Life +Times, published in the New York Times, Harper's Bazaar and STC and about to feature, live, drawing in a performance with novelist Zadie Smith.