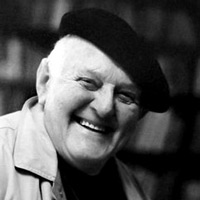 In 2001 Dr John Olsen was made an Officer in the Order of Australia (AO). In 1977 he was awarded the O.B.E. for services to the Arts and in 1993 he was awarded an Australian Creative Fellowship. He was also awarded the Wynne Prize in 1969 and 1985 amongst many other awards throughout his career.


Adversity often centres us to work from our core. This exhibition represents a particularly difficult and emotional time for John with the decline and eventual passing of his wife Katharine. A day to day concern, he grappled with being present for her and maintaining his studio practice. One would thereby assume that John would entertain a lugubrious theme encompassing dark palettes and reflective metaphors of mortality. Paradoxically we see him taking refuge in the joyous genres of his life's work. This exhibition is a celebration of both John and Katharine's lives.

It is a rare privilege to grow from infancy to maturity within this vast body of work. In many ways, John's paintings have the ability to distort and play with time. The joyful immediacy of his mark conceals the gravitas that forms the bedrock of six decades of painting. Watching the work at firsthand, I can say that the iconic fluidity of his line, his seamless pleasure (and success) in life, and what seemed like a rolling cavalcade of great and major works of art took tremendous drive and concentration.

Its smudged, cadmium yellow face keeps reinventing itself in the forms of giant paella pans, ponds, inland lakes, swollen valleys and the adventurous line that could never draw a perfect circle. As he often described it, 'The line that takes itself for a walk'.

It is well known that my father likes to traverse the Australian interior from above. On my first aerial journey with him to Lake Eyre / Kati Thander, in my thirties, I saw the land through a different eye. Here was supposed desolate isolation, teeming with life. Here, as the intricate map, the delicate palette, I saw the winding sensuality of the pink salt flats, the energy of perpetually lapping waves. All that apprehension about the dry interior dissolved and here was a haiku and a hurrah. Such a flat land can only be accurately described from above and yet I feel John Olsen has done so much more than evolve a convex picture plane in macrocosmic detail. What he manages is the simultaneous experience of vast space: you?ve got to look at it all and that?s tough painting and it is contemporary.

John Olsen is not an abstract artist; he is one of the great evocative painters. His link to poetry is his other great strength. I feel he has been gifted in his ability to understand beauty and still praise the ugly, the uneven, the difficult. His work also spans and masters many disciplines. A passionate collector once hailed him 'the Picasso of Australia', a patently throwaway remark, and yet effectively like Picasso he has mastered and never faltered in any of his chosen mediums. Even ceramics. The idiosyncrasy of his mark is inherent everywhere.

People see pain as profound and pleasure as mildly suspicious, yet both are present in equal measure in the work of John Olsen, you just need to excavate a bit deeper.

Everything my father touches is full of passion, intensity, truth and curiosity. The child is always alive. All my life he's been watching, absorbing and doing much more than just taking notes. So often he has been known by his motto, 'I am in the landscape and the landscape is in me'. That line, over time, became indivisible with his artistic identity and in the process he changed the face of how we see this terrain. He changed the very essence of what modern landscape painting is by shrinking the sky, turning his back on conventional geometry, speaking his own language and always returning to the egg-yolk magnetic energy of the sun.

In death brings new life. This work is a celebration of human life and nature. Through melancholy there is subsequent rebirth and its reward is truth and substance in joy.

If you own, or have owned in the past, an original John Olsen work, please contact Kylie Norton, editor of the John Olsen Catalogue Raisonné at editor@johnolsenartist.com